Mild annoyance lies behind this post.  I’m writing as I travel home from a two day conference, organised by the Chartered Institute of Ecology and Environmental Management with the title ‘Ecosystem Services 3: Rivers – A Framework For Action’.  The meeting had several interesting papers but, at times, lacked a hard critical edge, exemplified by the following example:

Two of the early speakers commented on the problems of physical modification of rivers, noting that in-stream structures such as weirs often present serious obstacles to the migration of salmon and other migratory fish.   In theory, you should be able to construct fish passes around these weirs so that the fish are not obstructed.  In practice, however, many fish passes are not particularly successful.   ‘Why not’ suggested one questioner after the talk (representing Natural England, I think), ‘just remove the weirs altogether and restore natural flow regimes.’   This suggestion was greeted with applause and even a few ironic cheers from parts of the audience.

About six months ago, however, I joined the local rowing club in Durham. ‘Recreation’ is a ‘service’ that society gets from our rivers, just as much as nature and wildlife, the primary focus of interest for this audience of conservationists.   Rowing here depends upon the weirs across the River Wear (you can see one of them in the classic view of Durham Cathedral which I posted on 29 July. (This view, itself, could be classified as an ‘aesthetic’ ecosystem service).  There are about 500 members of the rowing club and, at a guess, between 500 and 1000 students in University and College crews.  That’s a huge constituency whose interests are in conflict with the ambitions of many conservationists. 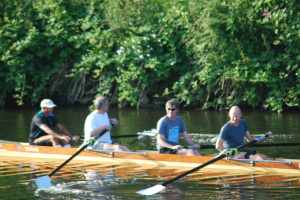 I had come to the conference to see how this type of conflict of interest would be resolved, and was a little surprised to see how little it featured.  Only three of the 18 speakers addressed the issue of trade-offs between different ecosystem services and only half made any reference to public participation or stakeholder engagement at all.  I heard a good example of constructive engagement with anglers on the River Itchen during a workshop session but this was a situation that could be sold as a ‘win-win’, with both anglers and conservation benefitting.  For the most part it was conservationists talking to conservationists without anyone to challenge their assumptions.   I left feeling with a feeling that life out there in the real world may not always be this cosy.

5 thoughts on “Bring on the Dambusters …”