On the way back from Latitude I called in to see my daughter’s new flat in Lincoln and realised that it was just a couple of hundred metres from a rather ghastly 1970s monstrosity of a building that played a small but significant role in my professional life.   In its current guise Aqua House, Lincoln is occupied by Anglian Water but back in 1991 it was the local office of the National Rivers Authority (NRA), the predecessor to the Environment Agency.

I had just returned from two years teaching at a university in Nigeria to take up a National Rivers Authority fellowship at the University of Durham.   During my time in Nigeria, I had known several development professionals and they were always emphasising the importance of consulting the beneficiaries in order to tailor aid and development programmes to their needs rather than imposing well-meaning “solutions” conceived by “experts”.   The key phrase was “bottom up”; “top down” was virtually an insult. 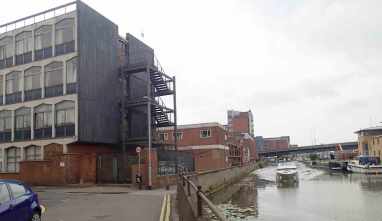 Aqua House, Lincoln. The River Witham is on the right hand side of the picture.

Having been tasked for my fellowship with developing new approaches to assessing ecological quality, it made perfect sense for me to go on the road and talk to some experienced NRA biologists to get their views on what was needed.   I visited Nottingham and Lincoln on this trip, along with a couple of other laboratories on other visits. At Lincoln, I met Chris Extence and Bill Brierley and we had a lively chat for an hour or so.   The message that came out loud and clear from them, as well as from several of the other biologists I spoke with, was that, in RIVPACS, the NRA had an effective means of assessing organic pollution. There would be no point in trying to re-invent the wheel and develop an algal-based method that could do this.   However, they did comment on the inability of RIVPACS to detect the effects of inorganic nutrients.   Several had noticed, in the course of their visits to rivers to collect invertebrate samples, a gradual increase in the quantities of filamentous algae that they were seeing.   A means of quantifying this would let them make more systematic observations that would complement, rather than overlap with, data from RIVPACS.   That in turn, set me thinking and led, eventually, to the development of the Trophic Diatom Index.

I do remember that these road trips to consult biologists at the sharp end of environmental regulation were tolerated rather than encouraged by my supervisor at the time.   His attitude was that we should tell the NRA what they needed rather than ask what was wanted.   It was an attitude typical of academics of the day and, I am afraid to say, still very common.   Until just a few years ago, biologists who worked for the NRA, the Environment Agency and similar bodies spent far more time in the field than the average mid-career academic and had a tremendous amount of knowledge about their local rivers as well as an understanding of the broader legislative framework that is necessary if you are to convert “data” into “evidence” that can be used to drive improvements.  I am fairly sure that, without those trips to Lincoln and other NRA offices back in 1991, I would have spent the next two years tilting at windmills.