The spectacular Renzo Piano-designed MUSE in Trento, Italy, with the alps in the background. June 2015.

A little more in this post about the AlgArt exhibition, which I mentioned in the previous post, which is on at MUSE, the Museum of Science in Trento, Italy…   The museum building itself is quite spectacular, having been designed by Renzo Piano, best known for the Shard in London.   One of the themes of my scientific contribution to the meeting was the importance of scientists being able to communicate with the wider world, and the AlgArt exhibition provided an opportunity to put this into practice.

Alongside my own work, there was work by two Trentino-based artists, Viviana Puecher and Maria Giovanna Speranza, as well as by two Innsbruck-based artist-scientists, Doris Gesierich and Werner Kofler, who exhibit as “Duo DOWE”. Their work, “Scacco matto” (“checkmate”), which hung in the atrium of MUSE, juxtaposed diatoms, photographed with the scanning electron microscope, against photographs of the macroscopic world, to create surrealistic montages that played games with viewer’s perceptions. 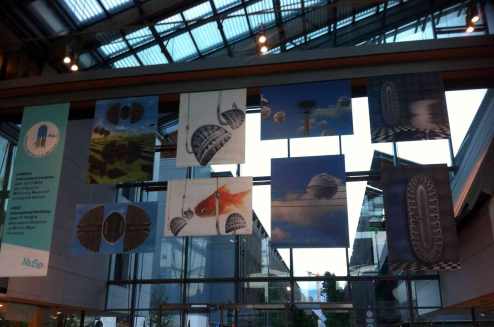 Duo DOWE’s installation, “Scacco Mato”, in the atrium of MUSE, as part of the AlgArt exhibition, June-July 2015.

Upstairs, Maria Goivanna Speranza and Viviana Puecher had worked together to produce a series of large-format works in mixed media that included images of diatoms into settings that exploited the sensuality of these algae. Alongside these were four of my own works, depicting my own interpretations of underwater algae-filled landscapes.   I’ve written about some of these in earlier posts (see “A winter wonderland in the River Ehen” and “Subaquatic landscapes in Pangong Tso”), and you can buy Giclée prints of these from https://folksy.com/shops/MartynKelly.

The three elements of AlgArt all represented very different journeys: Duo DOWE were scientists talking in the language of modern art, Viviana Puecher and Maria Giovanna Speranza were artists exploring science without the restrictions of formal scientific training, whilst I was a scientist trying to use artistic media to represent the real world. Judging by the number of questions that I had to field (via a translator), the exhibition did manage to excite some interest amongst the visitors. A small step, perhaps, towards my wider goal of raising awareness of the importance of algae?

Another view of “Immaginato ma non immaginario” at MUSE, Trento, June-July 2015 with (on the right) a close-up of two of the works on display.