David Attenborough, doyen of TV Natural History programmes, celebrates his 90th birthday today.  I have occasionally been rude about Attenborough and TV nature programming in general in this blog (see “Africa”) but I cannot deny that his ground-breaking series “Life on Earth” had a deep influence on me, and my generation of ecologists, when it was first aired in the 1970s.

I have a theory that David Attenborough is the modern-day successor to King David, the Biblical Psalmist.  Leave aside the disputes about who actually wrote the Psalms for the moment, and just consider his series, Life On Earth, Life in the Undergrowth, The Blue Planet and all the rest – as modern, secular responses to the experiences which inspired the Psalms.   The Biblical David praised with harp and lyre; our modern David uses the television camera.  The awe in a world that the former ascribed to God, the latter attributes to evolution.   We understand creation to be a more dynamic entity than our forebears could ever contemplate and, as such, King David’s God-as-a- noun becomes modern David’s god-as-a-verb:  As scientists, we strive for objectivity in our professional writings yet most biologists I have met still admit to awe when contemplating nature and, in this, there is, perhaps, a vestigial spirituality which the psalmists would recognise?    Even Darwin occasionally lapsed into near-psalmody, most memorably in the “tangled bank” passage right at the end of Origin of the Species.

Souvenirs of my life on earth: a termite colony in Yankari game park, Nigeria, 1990.  The top picture shows a lion, also at Yankari.

To be strictly accurate, the biblical David did not spend much time contemplating nature (look at Job chapters 38-40, if you want a biblical writer contemplating the wonders of the natural world).  Some of my favourite Psalms are those in which the author sits on a dark hillside and contemplates the night sky.   This was cosmology in its most primeval form: gazing in awe at the world around and beyond us, and contemplating its origins, our place in it, and its (and our) ultimate fates.   If this is what a man writes staring up at the cosmos with his naked eyes writes, what would he have written, had he had a telescope?

And just as Biblical David found reassurance in the form of God, so modern-day David offers reassurance in the form of science.   His confident delivery offers us a somewhat optimistic view of a world whose mechanisms are understood by scientists.  To my mind, this means that the complexity – and our lack of understanding – of the more prosaic “back room staff” of ecosystems is underplayed.  This, however, would distract from the visual splendours that keep the viewers entranced.   The scientist, as portrayed by Attenborough (he always looks the part!) needs to slot neatly into the hole where, in pre-Enlightenment times, God sat.

The poetry of the Old Testament extends into the writings of the prophets, and so it is today.  It should be no surprise that the medium that has done so much to reveal the wonders of the natural world to us is also an effective platform for highlighting the threats that the world faces.  Again, I have my concerns (see “The one where the author gets sentimental about pandas … almost”) but Attenborough has probably done as much as anyone in the English-speaking world to get climate change and habitat loss, in particular, onto the political agenda.   This means that he is more than just a David for our age; he is also a Jeremiah.   If, however, the authorities of our time decided that Attenborough, like Jeremiah, should be tossed into a well, we can be reassured that he would probably find enough of interest at the bottom to make yet another programme … 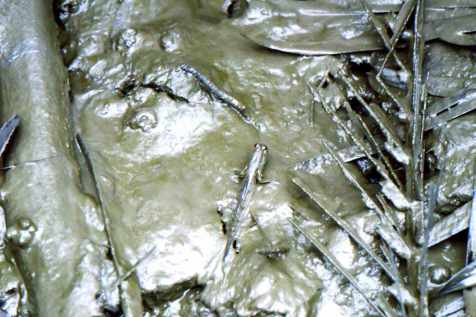 Souvenirs of my life on earth: mudskippers in a mangrove swamp near Oron, southern Nigeria, 1990.   You can also see some chocolate-brown diatom films on the mud surface.