The images above show one of the commonest diatoms that I find in UK waters.  It is a tiny organism, often less than 1/100th of a millimetre long, which means that it tests the limits of the camera on my microscope.  In recent months, however, it is not just the details on Amphora pediculus’ cell wall that I am struggling to resolve: I also find myself wondering how well we really understand its ecology.

The received wisdom is that Amphora pediculus favours hard water, does not like organic pollution and is relatively tolerant of elevated concentrations of inorganic nutrients.  This made it a very useful indicator species in a period of my career when we were using diatoms to identify sewage work s where investment in nutrient-removal technology might yield ecological benefits.  There were many nutrient-rich rivers, particularly in the lowlands, where any sample scraped from the upper surface of a stone was dominated by these tiny orange-segment-shaped diatom valves.   Unfortunately, twenty years on, many of those same rivers have much lower concentrations of nutrients (see “The state of things, part 2”) but still have plenty of Amphora pediculus.   Did I get the ecology of this species wrong?

The graph below shows some data from the early- and mid- 1990s showing how the abundance of Amphora pediculus was related to phosphorus.   The vertical lines on this graph show the average position of the boundaries between phosphorus classes based on current UK standards.   Records for A. pediculus are clustered in the “moderate” and “poor” classes, supporting my initial assertion that this species is a good indicator of nutrient-enriched conditions, but there are also samples outside this range where it is also abundant, so A. pediculus is only really useful when it is one of a number of strands of evidence. 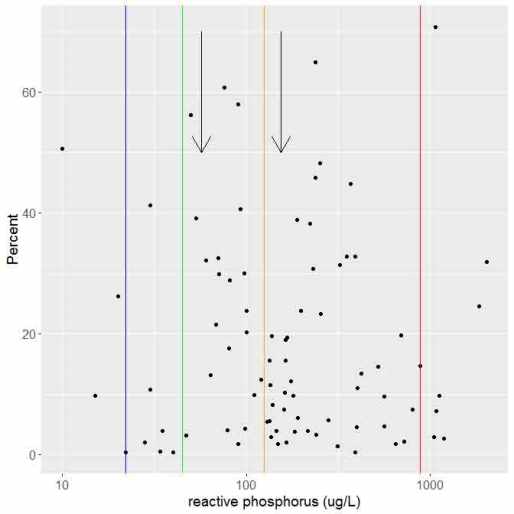 The relationship between Amphora pediculus and reactive phosphorus in UK rivers, based on data collected in the early-mid 1990s.  Vertical lines show the average boundaries between high and good (blue), good and moderate (green), moderate and poor (orange) and poor and bad (red) status classes based on current UK standards and the two arrows show the optima based on this dataset (right) and data collected in the mid-2000s (left).

If we weight each phosphorus measurement in the dataset by the proportion of Amphora pediculus at the same site (i.e. so that sites where A. pediculus is abundant are given greater weight), we get an idea of the point on the phosphorus gradient where A. pediculus is most abundant.   We can then infer that this is the point at which conditions are most suitable for the species to thrive.  In ecologist’s shorthand, this is called the “optimum” and, based on these data, we can conclude that the optimum for A. pediculus is 154 ug L-1 phosphorus.  The right hand arrow indicates this point on the graph below. However, I then repeated this exercise using another, larger, dataset, collected in the mid-2000s.   This yielded an optimum of 57 ug L-1 phosphorus (the left hand arrow on the graph), less than half of that suggested by the 1990s dataset.   There are, I think, two possible explanations:

First, the 1990s phosphorus gradient was based on single phosphorus samples collected at the same time that the diatom sample was collected (mostly spring, summer and autumn) whilst the mid-2000s phosphorus gradient was based (mostly) on the average of 12 monthly samples.  As phosphorus concentrations, particularly in lowland rivers, tend to be higher in summer than at other times of the year, it is possible that part of the difference between the two arrows is a result of different approaches.  (For context, in the 1990s, when I first started looking at the effect of nutrients in rivers, phosphorus was not routinely measured in many rivers, so we had no option but to do the analyses ourselves, and certainly did not have the budget or time to collect monthly samples).

However, another possibility is that the widespread introduction of phosphorus stripping in lowland rivers in the period between the mid-1990s and mid-2000s means that the average concentration of phosphorus in the rivers where conditions favour Amphora pediculus have fallen.   In other words, A. pediculus is tolerant of high nutrient conditions but is not that bothered about the actual concentration.   My guess is that it thrives under nutrient-rich conditions so long as the water is well-oxygenated and, as biochemical oxygen demand is generally falling, and dissolved oxygen concentrations rising (see “The state of things, part 1”), this criterion, too is widely fulfilled.   I suspect that both factors probably contribute to the change in optima.

But the second point in particular raises a different challenge:  We often slip into casual use of language that implies a causal relationship between a pressure such as phosphorus and biological variables whereas, in truth, we are looking at correlations between two variables.   Causal relationships are, in any case, quite hard to establish and the effect that we call “eutrophication” is really the result of interactions between a number of factors acting on the biology.   All of these simplifications mean that it is useful, from time to time, to look back to see if assumptions made in the past still hold.   In this case, I suspect that some of our indices might need a little fine-tuning.  There is no disgrace in this: the evidence we had in the 1990s led us to both to a conclusion about the relative sensitivity of Amphora pediculus to nutrients but also fed into a large-scale “natural experiment” in which nutrient levels in UK rivers were steadily reduced.   When we evaluate the results of that natural experiment we see we need to adjust our hypotheses.  That’s the nature of science.  As the sign on the door of a friend who is a parasitologist reads: “if we knew what we were doing, it wouldn’t be research”.

3 thoughts on “The challenging ecology of a freshwater diatom?”