I’ve got two pictures on display as part of an exhibition at Durham University Botanic Gardens, both showing abstract or semi-abstract views of algae.  One is my sextych of the alga Apatococcus(see “Little round green things …”) and the other is a triptych based on Haematococcus, an alga which I wrote about in “An encounter with a green alga that is red” back in 2013.   Both pictures were painted for my final degree show back in 2008 and both addressed questions about the boundaries between abstract and representational art.

The point that I was trying to make with these images is that the boundary between abstract and representational art depends partly on what the viewer knows about the subject matter and, in the case of algae, this is usually not very much.  In cases such as these, the legend becomes very important as a means of bridging the gap between abstraction and reality by providing just enough information to help viewers make sense of the content (see “How to win the Hilda Canter-Lund Prize (2)”).   In the case of microscopic images, this should always include some indication of scale, written in terms that non-biologists can easily understand (I would always write “1/100thof a millimetre”, rather than “10 micrometres”, for example).

This issue of viewers being able to “unlock” the meaning of images extends beyond the abstract/representational boundary that I encounter when displaying images of the microscopic world.  Exactly the same challenges occur when, for example, secular western Europeans look at eastern Orthodox icons, a subject that occasionally creeps into this blog (see, for example, “Unorthodox icons”.   My own curiosity about this art form led me to spend a week studying icon painting at the Quaker College in Woodbrooke, in the suburbs of Birmingham.  About ten minutes away from Woodbrooke there is the Serbian Orthodox church of St Lazar (built after the second world war by Yugoslav refugees with financial support from the Cadbury family, the Quaker philanthropists who also established Woodbrooke).

I talked a little about the practice of icon painting in “The art of icons …”.  Today, I am more interested in the symbolism.   A secular westerner can look at many of the icons I’ve depicted and broadly catagorise the contents: most would recognise that Fr Nenad, the priest of the Selly Oak Orthodox church, is holding an icon that depicts the crucifixion, for example, or that the icon just to the left of the centre of the doors in the iconostasis in the lower image depicts the Virgin and Child.  However, the symbolism goes much deeper.   I have a spotter’s guide to icons (sad, I know …) and it lists twenty eight different variants on the basic depiction virgin and child, differing in the physical relationship of Mary and Jesus, their facial expressions and the setting.  Each of these have a slightly different meaning for the Orthodox faithful.   The westerner sees “virgin” and “child”, the eastern Orthodox devotee sees so much more. 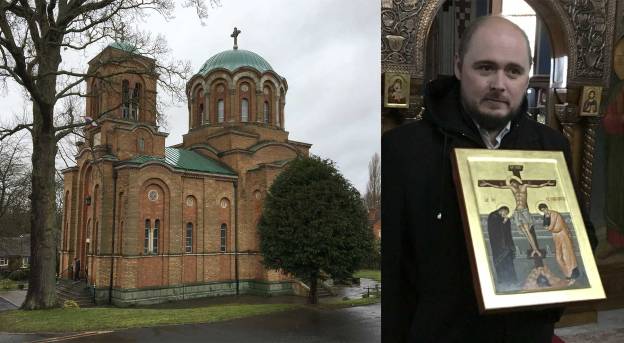 The Serbian Orthodox Church of the Holy Prince Lazar in Selly Oak, Birmingham with, right, Father Nenad displaying an icon of the crucifixion.

What’s all this got to do with painting algae, you may ask.   Scientific illustratation and icon painting are two branches of applied art, where the subject matter serves a higher purpose.  Both, in their own way, try to help viewers understand their place in the world.  If you are not religious, you may not be comfortable with this comparison but, for most of Europe, east and west, until the Enlightenment, this would have been the case.   In both cases, however, the image cannot be viewed in isolation, the viewer needs the appropriate “keys” to unlock meaning.   Even then, the viewer is not a passive observer.   The icon requires a response from the viewer, it is the focus for contemplation and meditation and, I suggest, scientific images, when displayed as “art” should play a similar role, inviting viewers to reflect upon the mysteries of the natural world and demanding a response.

The iconostasis at the Serbian Orthodox Church in Selly Oak.