I was lucky enough to spend a couple of days in the Shetland Islands during last week’s spell of warm weather and spent one of my mornings there hiking in shirtsleeves across moorland to a remote loch.   Good infrastructure is a legacy of the Shetland Islands’ association with the oil industry, and this includes a strong mobile network, meaning that I managed to find this particular loch using the Ordnance Survey maps on my smartphone. I would not normally rely upon a mobile signal to navigate across such remote terrain but in Shetland it is often possible.  I would, nonetheless, recommend keeping a paper map and a GPS in your kit just in case, as I did lose the signal on a few occasions during my stay.

Most of the lochs in the northern part of mainland Shetland are shallow, peaty water bodies, with soft water and relatively sparse assemblages of aquatic plants.   Parts of the littoral zone of this particular loch, however, had extensive growths of submerged mosses.  It is a long time since I was proficient at identifying aquatic mosses but these clumps look likeWarnstofia fluitans to me, though I am willing to be proved wrong.  I did try to remove some leaves and have a proper look but that task was complicated by tufts of attached filamentous algae.   In their submerged state, these formed distinct clusters at intervals along the straggly stems of the moss but, once removed, the filaments collapsed to smother the leaves and confound my attempts to run a scalpel blade along the stem. 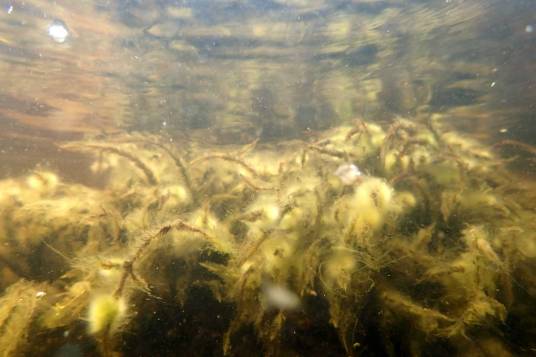 Submerged colonies ofWarnstorfia fluitans(?) smothered byOedogoniumfilaments in Gossa Water, north Mainland, Shetland (HU 4354 6047). Gossa Water (one of five that share this name in the Shetland Islands!) is illustrated in the photograph at the top of this post.

The filamentous alga proved easier to unmask: the unbranched filaments, reticulate (net-like) chloroplasts and distinctive ‘cap cells’ all identifying it as the green alga Oedogonium.  As is often the case, however, the populations lacked any sexual organs so it was impossible to know which species (see “The perplexing case of the celibate alga“ and, for a rare case of a sexually-mature filament, “Love and sex in a tufa-forming stream”).   Abundant epiphytes can be another feature of Oedogonium: unlike several other filamentous green algae it produces little mucilage which makes it easier for diatoms, in particular, to colonise.  As well as colonies of needle-shaped cells of Fragilaria gracilis there were also several Achnanthidium cells and, entangled around the filaments and the moss, chains of Tabellaria flocculosa.   Given that the Oedogonium was, itself, an epiphyte, these diatoms are ‘hyperepiphytes’, a term that attracts remarkably few Google hits, almost all associated with lower plants.

The ‘cap cells’ are one of the most distinctive features of Oedogonium and results from a distinctive mode of cell division that leaves rings of scar tissue at the point where the two cells split.   That we see four or more of these scars on a few cells whilst the great majority have none suggests that we are looking at a primitive form of specialisation, with a few cells in a filament being responsible for all the cell division.  What is more, these cap cells are also often the ones that form oogonia (see “Love and sex in a tufa-forming stream” for an illustration of this) and asexual zoospores, so there must be something slightly different in the biochemistry within these cells that drives these processes.   However, at this point the formal scientific literature goes strangely silent apart from a single paper published in 1962.  Curiously, the evolution of multicellularity is one of those big questions that attract a lot of top academics (see the reference to a recent paper in Nature Scientific Reports below)  whilst a genus of algae that seem to show some faltering first steps towards specialisation of some cells are largely ignored.  Another case of the “trailing edge” of science? 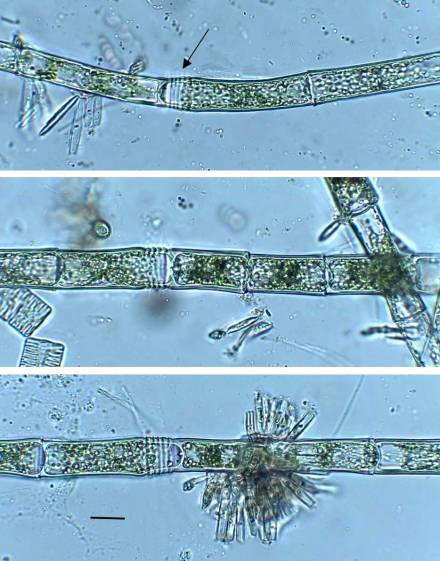 Oedogonium filaments growing on Warnstofia fluitans in the littoral zone of Gossa Water, north Mainland, Shetland, May 2019.   The arrow on the top image shows the “cap cells”.   Note also the cluster of Fragilaria gracilis(plus a few cells of Achnanthidium) on the lowermost filament and, in the middle image, two of the many cells of Tabellaria flocculosa that were entangled with the Oedogonium filaments and moss stems.  Scale bar: 20 micrometres (= 1/50thof a millimetre).

A zoospore being released from a filament of Oedogonium.  This series of photographs was taken by me in about 1993 and I have no details of the location from which it came.  The filament is about 40 micrometres (= 1/25thof a millimetre) in diameter.

Sightseeing in Shetland: the tombolo (sandy isthmus) linking St Ninian’s Isle with Mainland in the Shetland Islands, May 2019.

2 thoughts on “Hyperepiphytes in the Shetland Islands”