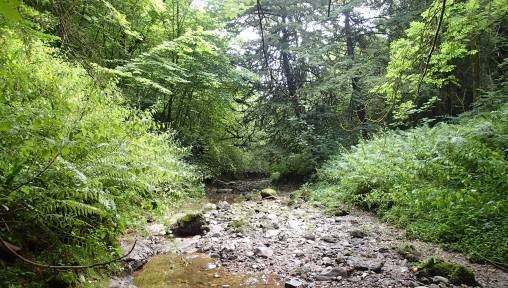 Some of my strongest impressions of Castle Eden Burn after last week’s visit concerned not what I found in the stream, but what was not there.  I mentioned in my previous post that I had not seen the mosses that I associated with streams in northern England in Castle Eden Burn, but there were other species, too, that I had expected to see but had not noticed.   Once I have noticed that something is absent, this absence becomes present.  I have noticed the presence of absence.  Woohoo: I’ve shoehorned Jean-Paul Sartre’s Being and Nothingness into a blog about ecology.

When I got back home I had read a chapter about the FBA’s study of the Winterbourne in Dorset, an intermittent stream flowing off the chalk downland, and noticed that they had recorded plants there that I knew from north-east English rivers, but which I could not remember seeing in Castle Eden Burn.  Was this because I had not searched the stream environs thoroughly, or is this a real difference between intermittent streams on chalk and on Magnesian limestone?

I went back this weekend to try to answer these questions, taking Heather with me, as her skills with the higher plants far exceed mine, and walked as much of the stream bed as we could, starting near the remains of a footbridge at NZ 424 389, and making our way downstream to Denemouth, where Castle Eden Burn joins the North Sea.  If my original intention was to better understand the burn by traversing space within the Dene, my first lesson concerned time: a week with some heavy rainfall separated my two visits and it was clear straight away that the Burn had been flowing during the week, with a fine layer of silt and mud spread across much of the surface, making parts of it slippery to walk upon.  There were standing pools of water at several points in the upper part of the Burn too.   Within a week the stream had come and gone, offering scant opportunities for any water-loving organism to establish.

We made our way along the Burn through the delicious silence of the forest.  The banksides were richly vegetated: masses of opposite-leaved golden saxifrage plus the mosses I described last time and many others, along with plenty of harts-tongue fern (Asplenium solopendrium).   Then, with a very clear demarcation, there was the stony stream bed with very little vegetation at all.    We looked hard for three plants, in particular, that I associated with the damp margins of streams, and which I had expected to see here: Verronica beccabunga (brooklime or water speedwell), Rorippa nasturtium-aquaticum (water cress) and Mentha aquatica (water mint).  None seemed to be present in any of the stretches we visited apart from a single sorry looking brooklime in the freshwater marsh at Denemouth .

What we did find, a little further downstream, was a pebble and gravel-dominated stretch with a straggly array of plants, all bent over in the direction of flow.   These included broad-leaved dock (Rumex obtusifolius), nettles (Urtica diocia), a few shoots of Himalayan balsam (Impatiens glandulifera) and some grasses.    Were I not standing on a dry stream bed I would have assumed that this was a bare piece of ground being colonised by typical ruderal species.  And that, I think, offers some insights into the ecology of Castle Eden Burn.   This is not a stream that occasionally dries out: it is a long-thin terrestrial habitat that is occasionally flushed through by water.   Welcome to north-east England’s premier wadi. 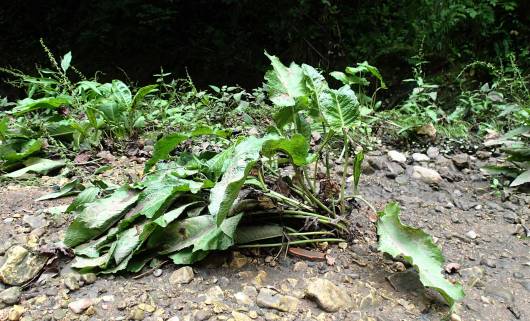 Rumex obtusifolius and other ruderal vegetation on the stream bed of Castle Eden Burn, August 2019.

This hypothesis really needs corroboration by a hydrologist, but the graph I showed in “Out of my depth …” shows that, despite flow being generally low,  episodes of high flow are scattered throughout the year, and I suspect that these keep the substratum mobile and, more important, stop organic matter accumulating to give amphibious plants an opportunity to establish.   The water table, too, I guess, is too far below the stream bed in between the spates to make it easy for plants to stay hydrated.   This is one of the main differences between Castle Eden Burn and the southern chalk streams, which are characterised by very stable flow regimes

From the point at which Blunt’s Burn enters Castle Eden Burn (NZ 436 396) there does seem to be permanent flow down to the sea.  Still, however, there was very little in-stream vegetation.  That was in contrast to the forest around us, which was floristically-rich (Heather has written more about this on her blog) and, on this warm summer morning, positively humming with bees and aflutter with butterflies.

A large embankment takes the busy A1086 over the Dene, the Burn passing through a long culvert at this point, after which there is a viaduct taking the coastal railway line across before the dene widens out into a large area of meadow just before it reaches the sea.   The stream’s path to the sea is, however, blocked by mine waste that was dumped from the coal mines that used to line the Durham coast.  This forces the stream to turn ninety degrees south for a few hundred metres before finding a way through and, gradually, trickling and percolating through the beach. The mines have all gone now and the sea is gradually eroding this compacted mass of waste.  Before the waste arrived, apparently, there was an area of saltmarsh at the mouth of the burn.   Now, there is a freshwater marsh, dominated by reeds (Phragmites australis).  When the mine waste finally goes, maybe the saltmarsh will return.  Meanwhile, Castle Eden Burn has no grand finale: it ends on a whimper not a bang.

We climbed a narrow, steep pathway up through gorse and brambles onto the clifftops overlooking these final stages of Castle Eden Burn to get a view that was, in light of all that had passed through my mind earlier, oddly symbolic.  The stream flowed almost due east until it encountered the bar, and the gentle arc which it then describes looks just like a question mark.   How ironic, I thought, for a stream that raises more questions than answers to sign off in that way …. 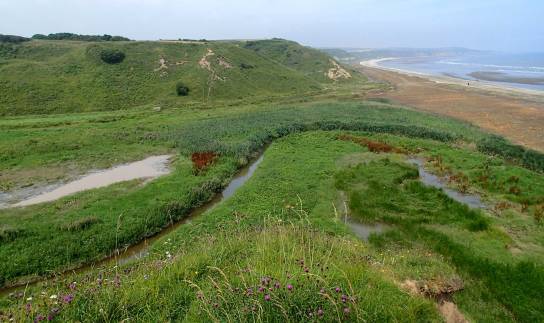 Denemouth, at the end of Castle Eden Dene, just above the point where the stream joins the North Sea.

2 thoughts on “The presence of absence in Castle Eden Dene”