My visit to the Valley of Flowers in India (see “Into the Valley of Flowers …”) is a fast fading memory but I have finally managed to get the diatom samples that I smuggled into my suitcase properly mounted and spent some time last weekend peering down my microscope and trying to match what I could see with the habitat that I remembered.

The sample I collected came from a first order stream which appeared from the mouth of a glacier a couple of hundred metres above us on the [north] side of the valley.  About 500 metres downstream it joined the Pushpanati River, a tributary of the Aleknanda, itself a tributary of the mighty Ganges.   It was just over a metre wide and a few centimetres deep and had a mixture of pebbles and gravel as its substratum.  Some of the larger stones were encrusted with what looked like growths of Chamaesiphon  (see “A bigger splash …“).  There were also a few flocs of green algae which turned out to be Zygnema, a relative of Mougeotia and Spirogyra ( see “Fifty shades of green …”) with two distinctive star-shaped chloroplasts.  They are not at their best in the photograph below because they made the journey from India to the UK soused in local vodka (a cheap and effective preservative for algae: your liver will not begrudge you this particular experience …). 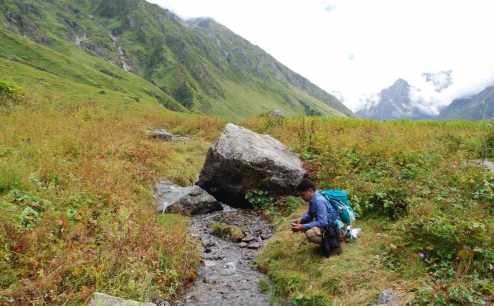 Vinood, our guide, looking at the stream that I sampled in the Valley of Flowers, August 2016.

Vodka-soused Zygnema sp from a glacier-fed tributary stream of the Pushpanati River (Valley of Flowers),  August 2016.  Scale bar: 20 micrometres (= 1/50th of a millimetre).

The diatoms were a surprise as almost all belonged to a single species, Diatoma mesodon, a species familiar to me from very high quality streams in Europe.  Ninety-five percent of all the diatoms I looked at belonged to this species, an unusually high proportion compared with other samples that I have examined, especially as there are no human pressures in the area that might influence diversity.   The Diatoma cells formed zig-zag chains, though these fell apart during the preparation process and the images just show individual valves.   Other diatoms present in small numbers included Meridion circulare var. constrictum (syn: Meridion constrictum) and two species of Eunotia, all of which suggest relatively soft water.

The low diversity intrigued me.   I have seen very low diversity with headwater streams, possibly because there is low potential for organisms from upstream to “seed” the location.   As small tributaries merge, so incocula from the sparse assemblages of these headwater streams will combine to create more diverse communities downstream.  Curiously, a recent paper argues the opposite: that headwaters are, in fact, hotspots of microbial diversity, and that this declines with increasing distance downstream.   However, this study takes a much broader view than just algae.  The authors suggest that it the close connection between headwater streams and the surrounding catchment leads to soil bacteria being washed into the stream.   So this result does not really contradict my observation; rather it highlights the limited insight that one may glean through looking at a single group of organisms.

Had I had more time (and more samples containers), it would have been interesting to follow the valley as far upstream as possible, to see if the other streams flowing down from the hillside had similar assemblages of algae, or if their algae were different.   My guess is that the patchwork of habitats would mean that the total diversity for the valley (“beta diversity”) would be considerably greater than the diversity at any particular site (“alpha diversity”).   If anyone wants to test this hypothesis, then all they need to do is make a three day journey from Delhi, with an extra day set aside for acclimatisation, followed by a two day hike up to a height of 3500 m.  And don’t forget to pack that bottle of vodka …