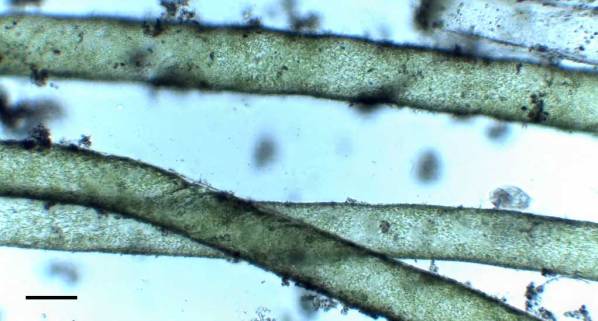 When I wrote about Vaucheria in a recent post I mentioned that it is “siphonous”, meaning that there are no cross walls dividing the filament into individual cells. Instead, the organism consists of branching tubes containing many separate nuclei and chloroplasts (see “When the going gets tough …”). What I did not do was explain why this might be of benefit to a stream-dwelling organism.

Many scientists over the years have considered the benefits that accrued when simple unicellular organisms banded together to form the first multicellular organisms. They’ve come up with a number of theories, all of which may apply in some cases. However, having accepted that multicellular organisms have a number of advantages over single cells, we have to ask why organisms such as Vaucheria seem to have gone one step further: not only have several cells banded together but they also seem to have lost the cell walls that usually separate the individual units. Most biologists, nurtured in the belief that the cell is the basic unit from which organisms are built, will find Vaucheria’s growth form to be a surprise.

The usefulness of cells, in an evolutionary context, is that this opens the way to specialisation and, over time, to the development of tissues within organisms dedicated to particular tasks. We could think of cells as tiny bags, each containing mixtures of enzymes most relevant to their function. Cells in a leaf, for example, will need to focus on producing enzymes required for photosynthesis whilst those in the trunk will be programmed to produce structural tissues. Cells, in other words, facilitate this division of labour within plants. However, a simple filamentous alga has far fewer needs than a mighty oak tree: the water around them provide both support (so complicated structural tissues are not needed) and a supply of nutrients (removing the need for internal plumbing). If there is less need for specialisation, then there is also less need to invest energy in building cell walls which, despite their advantages, also limit the capacity of cells to share resources. Cells of many algae and all higher plants have channels called “plasmadesmata” which link them together; however, these require energy to function.

If you will excuse a topical, somewhat teleological and rather tortuous metaphor, all plants have the choice of either a “trade deal” (investing energy in plasmadesmata in return for resources from neighbouring cells) or “open borders” (ditching cell walls and sharing resources). For most land plants, the former makes more sense; different lineages of algae, on the other hand, have dabbled in both strategies and Vaucheria represents a successful example of the latter. “Successful”, you sneer, “… it thrives in small clumps in polluted rivers. How is that successful?”. That, if I may say so, is a very terrestrio-centric view of the world: Vaucheria lives in a world where it does not need extensive investment in the tissues that comprise the organisms that are paraded before our eyes on the Living Planet. It has all it needs and neither boasts nor worries about tomorrow. 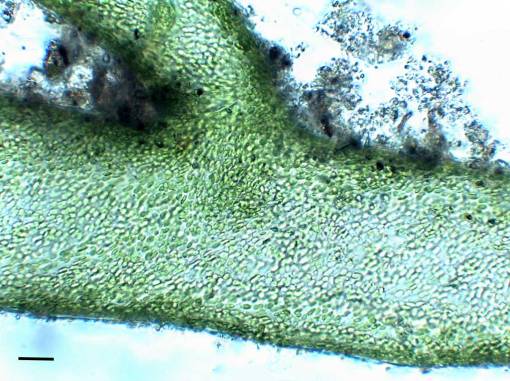 We can find siphonous algae not just in the Xanthophyta (the division to which Vaucheria belongs) but also in some lineages of the green algae, including the important marine genus Caulerpera. Cladophora, no stranger to these posts (see “Summertime blues …”) is siphonocladous, rather than strictly siphonous, meaning that it is divided into large cells, each of which contains many nuclei rather than the single nucleus that is characteristic of most cells throughout the plant and animal kingdoms. Balanced against this, there is a much greater number of multicellular algae that retain cell walls, some of which show considerable differentiation of tissue. Modern land plants arose from this latter largely because of the opportunities this differentiation offered. Being siphonous (or siphonocladous) has proved to be a good strategy under certain circumstances but, in turn, limits the options for the species to extend into new habitats.

In my earlier post I used the metaphor of a “sausage skin” to describe Vaucheria. Most of the interior of the organism is taken up by a vacuole, with the chloroplasts and other cell machinery pressed into a narrow band just inside the cell wall. If you watch closely, you can see the chloroplasts in living Vaucheria moving very slowly – a process called “cytoplasmic streaming”. In very bright light the chloroplasts gather at the sides, so protecting each other from harm (see “Good vibrations under the Suffolk sun …” for another way around this problem). The nuclei and mitochondria (the cell’s “batteries”) can also move around and studies have shown all three move by different mechanisms. Being a siphonous organism offers more prospects for this means of adaptation to local circumstances but, overall, the pros are outweighed by the cons, and there are far more genera of multicellular algae than there of siphonous or siphonocladous algae. Vaucheria and other siphonous algae are clearly very successful in a few habitats but the big picture suggests that being truly multicellular offered organisms far more options in the long term.