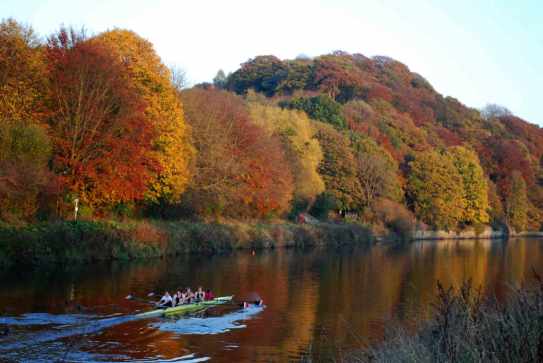 There, I’ve said it.   Now to redeem my professional reputation …

It has been a particularly fine autumn, with a long period of warm, dry, calm weather allowing leaves to stay on trees and giving us plenty of opportunities to stroll through Durham and enjoy their colours.   Some of the most vivid yellow-orange colours were right down beside the river, large heart-shaped leaves growing from a tangle of erect stems readily recognisable as Japanese knotweed, Fallopia japonica. There is not normally much good to say about Japanese knotweed, introduced to Britain in about 1850 via Kew Gardens, and now crowding out native species but the colours this autumn were so spectacular that I thought it deserved at least a brief mention here.   We can, perhaps, see the plant from the perspective of the Victorian horticulturists who thought that it would be an attractive addition to the garden flora.

It is all a matter of perspective: autumnal landscapes around Durham are enhanced by introduced maples and sycamores and, indeed, beech trees (not native to the north of England). Even larch, an introduced deciduous conifer, adds to the overall aesthetic, so long as it is planted in small, unregimented patches. But these are not vigorous hard-to-eradicate colonisers like Japanese knotweed or Himalayan balsam (see “The future is pink …”), so we do not damn them with the epiphet “weed”. “Weed” is not a botanical term; it is an anthropocentric word, a declaration of war, if you like, against a plant that intrudes into spaces where we do not think it belongs.   Just for a few weeks each Autumn, however, perhaps we should declare a truce?