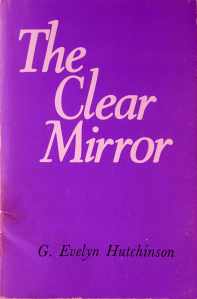 My microscopical investigations of Pangong Tsu a couple of weeks ago (see “Diatoms from the Roof of the World”) set me of on a hunt for an intriguing book.   In this post I mentioned that the eminent British-born limnologist G. Evelyn Hutchinson had visited the lake in the 1930s as part of the Yale North India Expedition. In addition to the scientific outputs from this expedition, he also wrote a travel book, The Clear Mirror. It is now out of print but I managed to track down a secondhand copy from a German book dealer via Abebooks.   It is an intriguing book, divided into three parts: a preliminary account of the art and architecture of catholic churches and institutions in the then Portuguese enclave of Goa, followed by a description of Buddhist monuments and ceremonies in and around Leh. Finally, he moves on from Leh to Pangong Tsu and surrounding lakes, and gives an interesting description of the ecology of the lake and of the vegetation of the surrounding areas.

The book captures Hutchinson’s extraordinary breadth of interest. The prose style is, to be frank, somewhat dated and my version had no illustrations to liven the experience, but I could not but be impressed by a writer who is prepared to tackle the art and symbolism of two different religions and the ecology of terrestrial and aquatic habitats in a single book. It is not the first time I have stumbled on Hutchinson during my travels: whilst working on the vegetation history of peninsula Italy during the late 1980s, I stumbled across a volume he had edited on the history of Lago di Monterosi , a small lake just north of Rome. Once again, the work managed to juxtapose ecology with disciplines as diverse as archaeology and classics.

Hutchinson’s breadth of interest did not come at the expense of depth in his own specialist research, because he was a very notable limnologist in his own right, the author of a very significant textbook, A Treatise on Limnology, and responsible for many significant advances, not least both proposing and partially resolving the paradox of the plankton (explaining the great diversity of plankton species in the face of the competitive exclusion principle).   They don’t make them like him any more.

Hutchinson, G.E. (1970). Ianula: an account of the history and development of Lago di Monterosi, Latium, Italy. Transactions of the American Philosophical Society 60: 1-178.