I usually write a post and then struggle to find a suitable title. This time, reading Rudyard Kipling on a flight to India, the title came first and all I need to do was find words to fit it. The honest truth is that an event-free flight is the best kind of flight, and BA257 was just that. My highlight on long-haul flights is usually catching up on films that I have missed; this time I whetted the appetite for travel with Werner Herzog’s Queen of the Desert, a biopic about Gertrude Bell. I should claim her as a local hero (the Bell family once owned the pit in my village) except that her contribution to dividing up the Middle East in the aftermath of the First World War unwittingly helped to precipitate the current mess. But, hey, who needs historical accuracy when you have Nicole Kidman looking ice-cool and elegant amidst the desert heat? (Tony Blair is a local lad, too, so there must be something about the north east that makes its children completely unsuited to  Middle Eastern geopolitics …)

That’s “Plane Tales” explained. Sort of. Now for “From The Hills”. I’m writing this from Clarke’s Hotel, a venerable relic of the Raj in the former hill station of Shimla. I first visited Shimla (or “Simla”, as it was known in Kipling’s day) over 30 years ago. This time, I am back, meeting up with Heather as she reconnoiters another route for Indus Experience. She’s been here for three weeks already and whilst I soak up the exotic ambience, she marvels at such modern contrivances as the hot bath and cold beer.

Half a day in the heat of Delhi’s strength-sapping heat is enough to make you realise why the colonial administration decamped to the foothills of the Himalayas during the hottest period of the year. We (myself and Helen, a fellow “plus one”) followed in their footsteps, catching a train from Delhi to Kalka, and then transferring to a narrow gauge train for the final five hours to Shimla. I first read about this in Paul Theroux’s The Great Railway Bazaar, which inspired me to add this to my itinerary on my first trip to India. Kalka is just at the edge of the Indian plain, and the train starts a long, slow climb almost as soon as it leaves the station, negotiating tight curves and over a hundred tunnels as it makes its way to Shimla. In the early stages it moves through dense broad-leaved woodland, but these gradually give way to pine forests as the train climbs and, as it approaches Shimla, the pines are interspersed with Deodar cedar trees too. An ironic whoop of delight greeted our first sight of Himalayan Balsam in its natural habitat.

The “toy train” making its way from Kalka to Shimla, August 2016. The top photograph shows a view of the Himalayan foothills from the train.

Shimla is a glorious, if slightly rundown, anachronism, with buildings evoking the Home Counties side-by-side with modern India. It is not difficult to imagine the mock-Tudor architecture as a backdrop to the shenanigans between colonial service wives and dashing subalterns that Kipling wrote about in Plain Tales From The Hills. The short walk between the Gothic Revival-style Christ Church, at one end of The Mall, the central thoroughfare, and Jakhu Temple, dedicated to the Hindu god Hanuman sets this contrast into perspective. “East is East”, wrote Kipling, “and West is West, and never the twain shall meet.” Shimla, in his time, would have encapsulated that, and some of his short stories touch on the complications that arose when love crossed the cultural and racial divides. In modern Shimla, the East has gradually reasserted itself. We are looking at the reciprocal of “Orientalism”: a mock Tudor building here having the same jolting effect as, maybe, Brighton Pavillon has to a British observer. 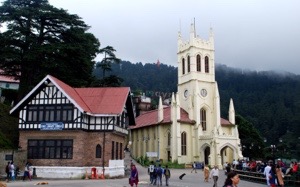 Christ Church and the town library in the centre of Shimla. The statue of Hanuman can be seen just to the left of the church tower.

Life is, of course, rarely that simple. The day before we travelled to Shimla we had visited the tomb of Humayun, the second Moghul emperor, in Delhi. To western eyes, this elegant building, a precursor of the Taj Mahal, fits all of our preconceptions of what an Indian building should look like. But the Moghuls, too, were interlopers, bringing Persian ideas and culture into the sub-continent a couple of centuries before the British arrived. In my travels around the Hindu heartlands of northern India I have seen almost no vernacular architecture that resembled, in any way, these Moghul edifices.  Despite being the quintessence of what we think of as “Indian”, they are no more or less “authentic” than Shimla’s mock Tudor architecture. The difference is that we have enough cues to make the connections at Shimla, but not for the earlier waves of invaders.

Arriving at Persia via Delhi and Shimla does, at least, bring us to the land where Gertrude Bell, feisty north east lass, whatever Werner Herzog and Nicole Kidman would have us believe, made her first explorations. That closes the circle and, as much by luck than judgement, justifies the title of my blog. Which was, you have to admit, too good to waste …