A note before I start: the last post (“Coxhoe”, March 15 2013) contained a short YouTube video that did not display properly when viewed as part of an email.  It is better to view the post through a browser.  Following this link will take you straight to it.

There is a series of lagoons along the side of the landfill site, the first of which has a striking milky-white appearance, due to the presence of what I presume to be suspended clay particles.   There is a narrow channel leading into a second pool, where the water is clearer but the clay minerals form a distinct layer on the bottom and, finally, another channel to the third lagoon in the series, again with clearer water.   We dipped a pH probe into each of these and recorded an extraordinarily high value of pH 11.1, dropping to pH 9.2 in the middle pool and pH 8.6 in the final pool.   Most of the surface waters in this part of Durham have a neutral or slightly alkaline pH, with values greater than about 8.5 being rare so these lagoons are very unusual.

The lagoons at Coxhoe landfill site.   The photograph was taken from the mid-point of the middle lagoon, looking up towards the milky-white (and extremely alkaline) waters of the first lagoon.

The bottom of the middle lagoon was covered with bright green flocs of algae which, when I put them under my microscope, turned out to be Spirogyra, with distinctly-helical chloroplasts.   Interestingly, this is a different species to the one that I found a few kilometres away, in the pond at Cassop (see post) but, once again, I cannot name the species because there are no reproductive organs present.   That it is present in this pool, but absent from the first suggests that it must be able to survive in water up to about pH 9.5: a very high value and one that must put some extreme stresses on the physiology of the organism.  That said, there are a few microorganisms that can thrive at even higher pHs – between 10 and 11 – but not at more normal pH values.

Spirogyra growing on the bed of the middle lagoon at Coxhoe landfill site.  Note the fine, white, clay substratum.

Ecologists have a name for these habitats where we topple off the limits of “survival of the fittest” and into the realms of “survival of the specially adapted”.  These “extreme environments”.  They encompass hot springs, soda lakes, highly saline environments and Antarctic deserts but, also, various man-made habitats.   These ponds are extremely alkaline but I can take you to springs associated with abandoned mines in County Durham that are highly acidic or which have very high concentrations of toxic metals.  The sobering fact about this particular “extreme environment” is that this is where all my own domestic waste ends up.  Just to peer into the streams and ponds and make a few simple measurements is enough to see the long-term consequences of consumer culture.     To be fair to Durham County Council, these environments were in lagoons constructed especially to keep the runoff from polluting surrounding streams.  Nonetheless, my visit still served a useful purpose by turning the abstract generalisations that we tend to make about “pollution” into something very local and personal. 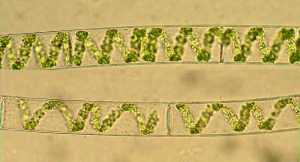 Filaments of Spirogyra from the middle lagoon at Coxhoe landfill site.   Each is about 35 micrometres wide.